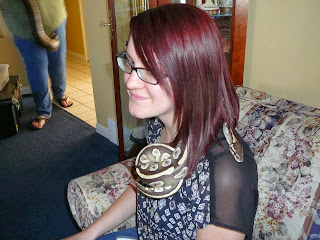 We had Kim's cold-blooded creatures come to our house for a birthday party. Lots of fun. 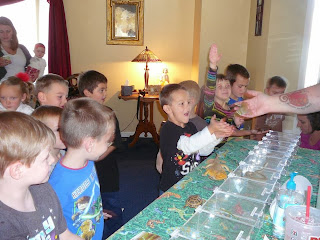 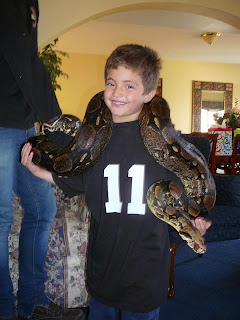 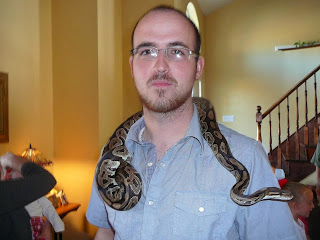 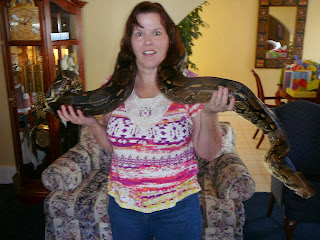 Slow-growing Charlotte’s Web yields marijuana designed for kids
Low in THC, the compound that gives users a high, this specialized plant is in high demand.
By Kirsten Stewart
| The Salt Lake Tribune
First Published Nov 10 2013 01:01 am • Last Updated Nov 10 2013 01:01 am
COLORADO SPRINGS • Preparing Charlotte’s Web is a protracted, tedious process that starts at "the grow," two massive greenhouses on 56 acres of spring-fed land at an undisclosed location in the mountains.
It’s harvest time and the greenhouses are full of towering plants.
Colorado’s sunny climate allows the nonprofit Realm of Caring Foundation to grow marijuana year-round. It gets two harvests a year, but hopes to ramp up production to three to four harvests through a light deprivation strategy that causes the plants to flower in winter.
About a third of each greenhouse is devoted to Charlotte’s Web, a shorter, squattier plant that grows more slowly than other varieties. The plant is high in cannabidiol (CBD) but low in tetrahydrocannabinol (THC), the component of marijuana that creates a high in users.
It’s in such high demand by parents of ill children, typically kids with epilepsy, that Realm can’t immediately supply them all.
"It keeps cutting into our THC growing, which has been necessary to move families off the waiting list," said 34-year-old Joel Stanley, one of six brothers running the foundation. "But we are walking a fine line" financially, he said, because Charlotte’s Web is sold almost at cost.
It takes 13 to 14 workers to tend the plants. Dogs roam the property, which is fenced and under 24-hour camera surveillance.
After the plants are harvested, they are hung to dry and cured like tobacco. They are trimmed, weighed and vacuum sealed into food-grade bags for shipment to dispensaries.
Everything is labeled and carefully inventoried, and every part of the plant is used, including the stems as fertilizer.
Charlotte’s Web is sent to Realm’s lab, an industrial kitchen in Denver overseen by 32-year-old Jesse Stanley.
Buds and leaves are stripped from the stems and soaked for hours in grain alcohol to extract the cannabinoids, Jesse Stanley explained. The resulting dark amber-colored liquid is strained through a fine mesh to remove all plant material and poured into a rotary evaporator to remove the alcohol.
A device used in chemical laboratories, the "rotovap" allows for liquid solvents — in this case, a CBD extract — to be quickly and gently removed without excessive heating. The end product is a gummy substance thicker than pancake syrup.
"We can do about a liter-and-a-half an hour," said Bryson Rast, a lab technician the Stanley brothers hired away from the pharmaceutical and nutritional supplement industries.
The brothers also just acquired a high-performance liquid chromatography machine, which they’ll use to validate samples, or measure the amount of CBD and THC in each batch. Currently samples are sent out for testing, which is expensive, said Jesse Stanley.
When the samples return, he dilutes them with olive oil.
"It’s primitive the way we do things, but accurate," he said. "Quality control is our goal."
Colorado Springs physician Margaret Gedde who is tracking children who are using Charlotte’s Web, said there are other growers that sell low-THC products.
"But so far nobody has stepped up like the Realm of Caring has to provide this to kids and do it in a way that is safe," said Gedde. "They grow it safely and test the batches so we know the actual milligrams and it can be accurately dosed."
Copyright 2013 The Salt Lake Tribune. All rights reserved. This material may not be published, broadcast, rewritten or redistributed.
Posted by Carol at 8:36 AM No comments:

What Recruiters Want & What Drives Them Crazy

Speaking a second language delays dementias, even in the illiterate, study finds

Speaking a second language delays dementias, even in the illiterate, study finds Nov. 6, 2013 at 4:00 PM ET
DAVID DUPREY / AP file
Speaking more than one language may ward off three types of dementia, including the Alzheimer's disease that affected this human brain on display at the Musuem of Neuroanatomy at the University at Buffalo, in Buffalo, N.Y.
There’s more evidence that speaking a second language can delay the onset of dementia later in life — this time in a population where even illiterate people reaped the benefits of being bilingual.
Conducted in Hyderabad, India, the largest study of its kind so far found that speaking two languages slowed the start of three types of dementia — including Alzheimer’s disease — by an average of 4.5 years.
“Being bilingual is a particularly efficient and effective type of mental training,” said Dr. Thomas H. Bak, a researcher at The University of Edinburgh and a co-author of the study published Wednesday in the journal Neurology. “In a way, I have to selectively activate one language and deactivate the other language. This switching really requires attention.”
That kind of attention keeps the brain nimble and may ward off not only Alzheimer’s disease, but other cognitive conditions such as frontotemporal dementia and vascular dementia, the new study found.
Bak is part of the team led by Dr. Suvarna Alladi, a professor of neurology at the Nizam’s Institute of Medical Sciences in Hyderabad. The researchers examined case records of 648 patients with dementia who entered a memory clinic at a Hyderabad university hospital between June 2006 and October 2012.
Slightly more than half of the patients, some 391, spoke more than one language in a place where many people grow up learning three or more languages, including Telugu and Dakkhini along with English and Hindi.
Previous studies have focused on the impact of bilingualism on dementia mostly in immigrants in Canada, which may have influenced the results, Bak said.
“It really brought up the question, is it the bilingualism or is it is being an immigrant?” he said. “They have very different lifestyles, very different diets, which can affect the outcome.”
Still, those studies also found that speaking more than one language delayed dementia by the same span of time, four to five years.
The Indian patients offered a chance to examine the issue in a society where many people are naturally multilingual and shift easily among different languages in different social settings.
“If I live in Hyderabad, I am practically always switching,” said Bak. “There will not be a day when I don’t have a chance to practice.”
The researchers found that patients who spoke a single language developed the first symptoms of dementia at age 61, versus age 65 ½ in those who were bilingual. The delay was slightly more than three years for Alzheimer’s disease, but about six years for frontotemporal dementia and about 3.7 years for vascular dementia.
In people who couldn’t read, the delay of dementia was about six years later in those who were bilingual versus those who spoke only one language — evidence that education isn’t the key in postponing problems, the researchers said.
The effect of bilingualism on dementia onset was independent of other factors including education, gender, occupation and whether patients lived in urban or rural areas, the authors said.
Speaking more than two languages didn’t appear to increase the effect, a result that surprised researchers, Bak said. Other studies have found that the more languages spoken, the greater the protection against dementia.
An outside expert who documented the first physical effects of the delay of dementia in people who speak more than one language praised the new study.
“Being able to show that immigrant status was not a factor answers one remaining question, said Dr. Tom Schweizer, a neuroscientist at St. Michael’s Hospital in Toronto, Canada, who found in 2011 that bilingual people have twice as much brain damage as those who speak one language before they show signs of Alzheimer’s disease.
“The fact that the illiterate subjects were also showing this strong effect was also novel,” he added.
It’s still not clear exactly how language acquisition triggers protection against dementia, or whether another kind of intense brain activity such as learning an instrument or doing puzzles could mimic the effect, Schweizer said.
Going forward, conducting dementia research in other non-Western cultures will be key to understanding the effect of bilingualism on dementia, the authors of the new study said.
“For me, the most important message is that you cannot do all the studies in the same place,”Bak said. “In completely different contexts, in complete different populations, we found the same effect.”
JoNel Aleccia is a senior health reporter with NBC News. Follow her on Twitter at @JoNel_Aleccia or send her an email.
Posted by Carol at 8:29 AM No comments: