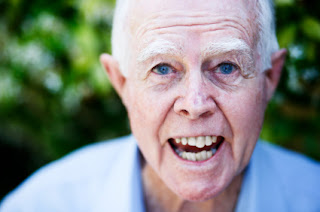 Loud screams echo in the hallway. A nurse’s attention shifts from the chart she was working on to the room from which the screams are coming. She runs toward the resident and provides verbal reassurance, coupled with physical comfort of rubbing his arm and shoulder. The screams cease. The nurse walks away and resumes charting when the screams echo again.
This scenario routinely occurs in long term care settings, with many challenging behaviors such as screaming out, aggression, and sometimes hitting. Such behaviors can increase over time, with staff often habituating a behavior-response pattern. The Functions Of BehaviorBehavior is everything that a person does. Waving hello, walking down the street, talking to a neighbor are all behaviors. These behaviors serve as a function for an individual: waving hello to gain the attention of anther person, walking down the street for exercise, and talking to a neighbor for social interaction.  Residents in long term care settings may exhibit maladaptive behaviors such as verbal abuse, physical aggression, elopement, noncompliance, or socially disruptive behaviors for a purpose, a specific function. Determining the function of the behavior will help staff assist the resident in exhibiting positive behavioral repertoires. From an applied behavioral analysis perspective, there are four functions of behavior. The most easily understood function is attention. In the example above, loud screams echo the hallway from a resident. The staff response is to approach and provide physical and verbal comfort. The screams cease when attention is given. The screams reemerge once the staff member has left.  This interactive exchange between the resident and staff has taught the resident that by screaming, he will gain staff attention, and when the screaming stops, the attention stops. This behavior response pattern will increase the likelihood of the behavior of screaming to become more frequent.  The second function of behavior is called escape. Demands placed upon a resident, such as showering, taking medicine, or changing clothes, can be viewed as aversive, which can manifest into verbal abuse or aggression. These behaviors serve as a function to ultimately escape from the desired task.  The most common scenario is when staff are delivering care. A resident may often yell or strike out in an attempt to terminate and “escape” from the activity. If the response from staff is to stop the activity, the resident is more likely to continue to strike out during care to escape. The third function of behavior is tangible. Residents often yell, curse, or strike out at staff when access to a particular tangible item is limited, such as the desire for more food at mealtime.  The last function of behavior is sensory. This occurs when the behavior serves as an automatic reinforcement independent of the environment. The resident’s behavior is self-stimulatory, such as scratching oneself.  Preventing Reinforcement So how can staff effect behavioral change? Well, it could be as obvious as staff giving a directive, or it can be as obscure as fixing a crooked painting on the wall.  While there are many variables that may influence challenging behaviors like these, including genetics, physical limitations, biological needs, and others, what is often not realized is that the environment—in this case, the staff’s reaction to the challenging behavior—plays a vital role in the resident’s behavior and, more importantly, can increase the future likelihood of the behavior.  This process is called reinforcement.  Reinforcement is a consequence that influences behavior. It increases the likelihood that the behavior will occur again under those similar conditions Data paint a picture. Data give the what, when, where, and how regarding a behavioral event. The “what” is what most people focus on, such as what happened? Staff might interpret this as “he struck the CNA [certified nurse assistant].” But is that the whole picture? Does that really describe what happened?  To be more specific, it is best to know what happened right before the resident exhibited the behavior. Something in the environment set up the event that compelled the resident to strike the CNA. This is a key component in understanding resident behaviors. Whatever it may be, having data to interpret will help put interventions in place to reduce challenging behaviors.  How does one know if something is reinforcing the behavior it follows? One of the best ways is to look at the ABCs of an incident: Antecedent, Behavior, and Consequence.

An antecedent is the first link in this chain of events. It tells caregivers what happened right before the behavior of concern.  In the example above, the antecedent was the resident sitting alone in the bedroom. The behavior is what follows. The behavior was the resident screaming; following the behavior is its consequence. The consequence was staff rushing to the resident, providing a great deal of tactile stimulation, such as rubbing the resident’s arm or shoulder, coupled with verbal calming, such as “It’s okay; can I help you?” What happens after the behavior—the response to it—is what strengthens or weakens the behavior or increases or decreases the likelihood of that behavior reoccurring in the future.  It is the future response that should be controlled, based on the behavioral approach.  Documenting The ABCsWhile there are several methods for determining the antecedents and consequences of a behavior, the most basic, yet effective, tool is an ABC descriptive analysis sheet. It captures the time, location, antecedent, behavior, and immediate consequence.

This tool is simple but effective in gathering pertinent information to identify components that influence behavior. Behavior is a form of communication. Taking the example of a resident striking a staff member following assistance with an activity of daily living, one can determine that hitting is a form of expression of not wanting to participate in that activity. If the response or consequence to that behavior is to leave the resident alone, the behavior of hitting will increase, as the resident has learned that the striking behavior is successful in allowing them to escape from that particular demand. Proven SolutionsFollowing are some proven solutions for reducing this behavior: 1. Noncontingent Reinforcement. This has been proven to be an effective intervention with attention-seeking behaviors. This procedure involves providing reinforcement, such as attention from staff via verbal praise or high fives on a fixed schedule (every 15 minutes, every hour) or at random, completely independent of the behavior. In the example of the resident screaming, staff would provide social praise every hour, regardless if the resident is exhibiting screaming behavior or not.  2. Functional Communication Training. This strategy is useful to teach the resident functional communication skills to replace problem behavior.  Teaching the resident to either say, “Come talk to me,” or gesture, “Come,” with his hand when he would like a staff member’s attention, staff will provide the attention and verbally praise him for appropriately expressing himself. This social reinforcement will increase the likelihood of the resident verbalizing the phrase, “Come talk to me,” as opposed to yelling out for attention. Staff should continue to provide attention every time the resident appropriately asks for it. Repeat the procedure as necessary. 3. Behavior Momentum. This technique is helpful to assist with compliance. A staff member presents a series of easy-to-follow requests for which the resident has a history of compliance. When the resident complies with several high-probability requests in sequence, the staff member immediately gives the target request, such as taking medications, and uses the momentum of the high-probability response in assisting with compliance of the low-probability request of taking medication.  Following is an example of how this might work:Staff member: “Hey, give me a high five!” (a high-probability request).Resident: Slaps the staff member’s hand.Staff member: “Great job!” or “Throw the ball to me” (a high-probability request).Resident: Throws the ball to staff member.Staff member: “Awesome, let’s take your medications” (low-probability request).Resident: Takes medications.These are just a few interventions that have been proven to be successful when implemented to help shape behavior. However, with any event that nursing facility staff are faced with, collecting data will help formulate an effective treatment plan to reduce these challenging behaviors. Danielle Russo, MA, is neurorehabilitation program director at Kindred Rehabilitation and Nursing of Braintree in Braintree, Mass.
This is from Provider OnLine Magazine
Posted by Carol at 3:58 PM