Grade-schoolers produce their own opera — with duct tape 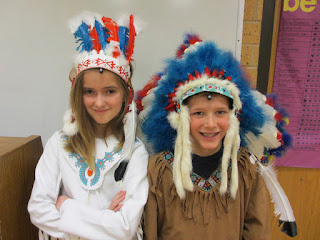 Published: February 28, 2012 10:13AM
| Special to The Tribune Fourth-graders at Knowlton Elementary in Farmington wrote and performed their own opera as part of the Utah Festival Opera & Musical Theatre’s children’s opera program. The storyline centered around a handful of Indian pranksters who sabotaged their tribe's teepees with duct tape. An opera that includes a verse about playing a prank with duct tape is not your typical opera.

And yet duct tape, sticks and yo-yos were an integral part of the opera performed by Julie Potter’s fourth-grade class at Knowlton Elementary in Farmington.

The students staged their own opera last month titled “Indian Trouble.” It was the culmination of months of work by the students as part of Utah Festival Opera & Musical Theatre’s children’s opera program.

A beaming Principal Grace Larsen introduced the production to students:

“You are in for such an amazing treat,” she said. “I have watched this opera from the very beginning and they have done an amazing job writing the music, the dance and the script.”

The topic for the opera was chosen by the children based on a unit they were studying in Utah history: American Indians. The story — written by children — revolved around a fictional tribe of Indians known as the Paka Pakas.

As the story goes, some of the tribe’s children were bored because all they did was hunt, fish and weave baskets. So a couple of them decided to play a prank by fastening tribe members’ teepees closed with duct tape. The pranksters continued their trickery until they accidentally burned down a teepee. Realizing the error of their ways, the children apologized and made amends.

Potter, along with parent Wendy McFarland, attended a nine-hour workshop during the summer to learn how to help the children piece together the production. Although the training was overwhelming, McFarland described the resulting opera as a worthwhile experience.

“It has been so much fun, so much work,” she said. “It’s been exciting to see the students come together and [discover] how much they can really do. They’ve done everything themselves. We were worried some of the parents wouldn’t understand the plot because it is 10-year-old humor, but it’s theirs.”

Pamela Gee, director of the Opera by Children program, said the process is truly educational.

“The students drive all the action, they direct their opera,” she said. “Everything is student-driven. There are no mistakes. They are empowered. They are so clever, they come up with the most creative opera. Adults would never think this way. They are magical. There is so much learning.”

Larsen couldn’t be happier to have the opera at her school.

“Research has proven the arts enhance learning,” she said. “Students have used their curriculum for this opera. Utah history and Indians are one of the first things they talk about. The curriculum is interwoven throughout the process.”

The students not only wrote and choreographed the opera, but they came up with the melodies. Using the students’ tunes, a composer with the opera company developed a musical score.

Performer Alex DeJong, 9, was excited to be in the opera.

“It was good,” she said. “Everybody did what they were supposed to. It was a lot of work and sometimes it was hard and we couldn’t figure it out.”

The Opera by Children program now works with 162 classes, which are writing operas throughout the state.

Although the productions are a ton of work, Gee said the journey is well worth the effort. Every year, teachers say they are not going to do the opera again, she mused. But after the children perform, they inevitably change their minds.

Special to The Tribune
Posted by Carol at 9:47 AM