That's not something you see everyday! 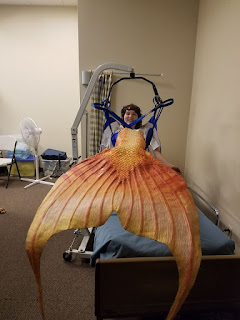 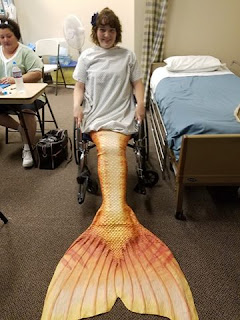 
The UNAR handbook will be changing in January 2017 this will change some of the skills students will be tested on.
Here's the link:
http://www.utahcna.com/forms/State%20of%20Utah%20CNA%20Candidate%20Handbook.pdf
Posted by Carol at 10:38 PM 6 comments:

UTAH NURSING ASSISTANT REGISTRY 550 East 300 South Kaysville, Utah 84037 Phone: (801) 547-9947 website: utahcna.com Expired CNA policy change update August 18, 2016 Nursing assistants with expired certificates may recertify for up to 1 year after expiration as follows:  6 months or less they can submit their renewal application that includes the signature of a licensed nurse who has verified that they have worked a minimum of 200 hours along with a $10 late fee for each month late.  6 to 12 months they can recertify by passing both the written and skills state certification exams on the first attempt. They have up to 3 attempts to pass in the 12 month period.* *This change allowing for up to 3 attempts to pass conflicts with current Utah Administrative Code and therefore cannot be put into practice. Expired CNA’s are currently given only 1 attempt to bass both the written and skills exams.
Posted by Carol at 10:37 PM 2 comments:

I created a 100 question practice test

Comments
Dear Claudia, Carol, and all the ccCNA staff,
I just wanted to say thank you for the excellent training I received in June during the CNA class! I had no trouble passing the state certification tests (I got a 94% on the written). Also, I remember asking Claudia at the start of class if hospitals would hire CNA's with no prior experience... Apparently, in my case, the answer is yes! I just accepted a position at the University of Utah in Acute Internal Medicine. I was offered the job immediately after my interview and I start full time (3 days a week) on Monday!
I'm looking forward to learning on the job while I'm in nursing school.
I just thought I would share this with you so if you get other students wondering the same question you can tell them it does happen.
Thanks again for a fun class that prepared me to pass the state exam! I'm excited for my new career!
Sincerely,
Megan Furman
Posted by Carol at 10:34 PM 3 comments:

Thank you for taking my call today. Attached is the position description for our caregivers. We pay hourly from $11-$15 an hour dependent on experience. We do provide benefits to all caregivers at 32 hours per week or more (the company pays 75% of any insurance premium). I am including our KSL link below.

Your help is greatly appreciated!

Charleston at Cedar Hills
Working at MBK Senior Living is more than a job–it is an opportunity to enrich the lives of our senior residents. Our positions provide the opportunity for associates to share their passion and dedication while making a difference in the lives of our residents every day. We offer a great work environment with competitive pay and benefits.
We are currently hiring for the following open positions:
Caregivers  Med Techs
(801)772-0123
10020 N. 4600 W
Cedar Hills, UT 84062
www.MBKSeniorLiving.com
If you are interested in any of these positions, please apply…
Posted by Carol at 7:21 AM 2 comments:

Highland Glen
Working at MBK Senior Living is more than a job–it is an opportunity to enrich the lives of our senior residents. Our positions provide the opportunity for associates to share their passion and dedication while making a difference in the lives of our residents every day. We offer a great work environment with competitive pay and benefits.
We are currently hiring for the following open positions:
Caregivers  Med Techs
(801)610-3500
10322 N 4800 W
Highland, UT 84003
www.MBKSeniorLiving.com
If you are interested in any of these positions, please apply…
Posted by Carol at 7:20 AM 2 comments:

Some analysts are wondering whether assisted living construction is due for a dip in key markets. (Photo courtesy Wiki Media Commons.)
Bill Myers
Good morning, ProviderNation. The fine folks at the National Investment Center for the Seniors Housing & Care Industry have crunched the numbers, and they have some slight concerns they’d like to share.
Particularly, they’re wondering whether assisted living construction is due for a business slump. “As of the second quarter, construction represented 6.1 percent of existing inventory, more than 200 basis points above the prior market cycle’s peak,” NIC Senior Analyst Christopher McGraw writes in the group’s most recent newsletter. “Between annual rates of inventory growth accelerating to nearly 5 percent and the flu season, occupancy has declined by 90 basis points since the fourth quarter of 2014 and is down 40 basis points from a year ago.”
Highlighted By Over-Supply
Overall, McGraw wonders whether the assisted living construction market is “nearing the point in the cycle that traditionally is highlighted by over-supply.”
As fire bells in the night go, McGraw’s analysis is hardly “irrational exuberance.” In fact, he tells me that worries about over-supply are driven by just a few markets—mostly in Texas.
“Dallas, San Antonio, Houston and Austin not only have high rates of construction, but a lot of units coming in,” he says.
The End Isn’t Near
That doesn’t mean that collapse is imminent.
“Houston in the past couple of years has had a lot of inventory come online, and there were predictions that there would be a lot of vacancy. But it absorbed the vacancy,” McGraw says. “The metro numbers could look large, but the projects could be scattered through the area. Once everything breaks ground and open, it could lift the market up.”
In fact, McGraw’s numbers also show that, despite the high rates of construction, rents in assisted living properties have held steady.
It is notorious that the baby boomers are getting on, but McGraw wants to remind the public that the steady growth in senior housing has little to do with boomers. The average age of entry into assisted living in the markets he studies is 82-86, McGraw says.
“It’s really their parents,” he says of baby boomers. “They really won’t hit the target market until the latter part of the next decade.”
Bill Myers is Provider’s senior editor. Email him atwmyers@providermagazine.com. Follow him on Twitter, @ProviderMyers.

Seniors Housing And The Age Of Irrational Exuberance…

Seniors Housing And The Age Of Irrational Exuberance…

Are seniors housing investors in for a real shock? (Photo courtesy of the fine folks at Wikimedia Commons.)
Bill Myers
Good morning, ProviderNation. Irving Stackpole is a man who is hard to impress. Stackpole, a veteran long term and post-acute care analyst who runs his own consulting firm in Boston, has already played Eeyore on providers’ chances in a bundled payment world, but earlier this week, he rang a fire bell in the night for the whole seniors housing sector.
This time playing Cassandra to the chorus, Stackpole comes right out and says, “Investors should be worried about oversupply” (emphasis, italics—and underline—all his).
“What’s amazing is the lack of caution,” Stackpole marvels, “despite the overall signs in the markets, and the devil-may-care attitude of some investors and developers. This may seem a troublesome detail, but occupancies are declining in most marketplace areas. The decline in occupancy isn’t because sales and marketing have collectively fallen asleep across the USA, it’s because the market for age-qualified individuals is declining.”
Demography As Destiny
For Stackpole, demography is destiny.
“From 1925 to 1945, birth rates in this country, and many parts of the world, plummeted due in large measure to the Great Depression and war,” he says. “These are the lowest birth rate years on record in the United States.”
That’s the very cohort, Stackpole says, that’s hitting America’s assisted living centers right now.
Now, Paul A. Samuelson famously disposed of stock viziers by pointing out that the market had correctly predicted “nine of the last five recessions.”
Irrational Exuberance
But those of us who’ve grown up in what might someday be called The Age of Irrational Exuberance have no right to ignore Stackpole’s warnings. That’s partly because he’s not the only one worried about oversupply.
But that’s also because “seniors housing,” as a sector of the economy, is only in its birth stages. (In 2009, for instance, not one of the nation’s largest real estate investment trusts bothered with seniors housing; today, three out of the top five do.)
Additionally, boosters have been arguing for at least a couple of years that seniors housing stock is undervalued. Yet the stocks remain stable, or even “disappointing,” and, in some cases, companies are under increasing pressure to sell.
The Danes Are Coming
Another reason to heed Stackpole is that he—like so many charming, sophisticated, and otherwise awesome observers—has his eye on the international dimensions of long term and post-acute care.
So it’s worth noting that the Danish invasion has begun.
On Tuesday, Ry, Denmark-based Pressalit Care announced that its height-adjustable toilet had won cUPC approval for the U.S. and Canada. cUPC is the Universal Plumbing Code. The announcement comes barely a week after a delegation of intrepid Americans traveled to Denmark to tour its long term and post-acute care sector; they returned with tales more wondrous than the Arabian Nights.
Bill Myers is Provider’s senior editor. Email him atwmyers@providermagazine.com. Follow him on Twitter, @ProviderMyers.

Come join our team at
Rocky Mountain Care Cottage on Vine
Looking for CNAs to join our team and assist our wonderful residents.
Flexible and willing to work with school schedules.
Stop by to see our comfy cottage and fill out an application.
For more information, please call Nikki or Allison
at 801-693-3800.