Reposted from
http://covenantbuilders.blogspot.com/2013/07/in-memory.html
This is a blog I follow that brings light to the lives children face in Eastern European Orphanges. Take a minute to read through the blog and say a prayer for these children.
Carol
The Lost Boys

Hanson belonged to a special group of boys who live in a certain orphanage in Eastern Europe, the orphanage where we adopted our son Aaron. Like Aaron and all the other boys at that orphanage, Hanson wasn’t a typical child; he was born with some special needs that kept him from developing as typical, healthy children do. In that part of the world, the usual way to handle a birth like Hanson’s is to hand the child over to the state government, which then places the child in a state orphanage called a baby house. Once in a great while, a child is fortunate enough to be adopted from his baby house; but if he isn’t, as Hanson wasn’t, then the state sends him to a special needs orphanage for older children, aged about 5 – 20. Most of the children who end up in these older-child special needs orphanages can only ever leave the orphanage system by dying, which is the way Hanson left it.
The quality of life in these special needs orphanages varies from bad to worse. At their best, such orphanages are poor, lonely places; but at their worst, they can be truly horrifying. While most Eastern European orphanages have enough funding for food and basic medical care, many do not have enough funding for any sort of education, activities or therapy. Even in Aaron’s part of the orphanage— the part for boys who could walk and talk— there were no toys, no books and no fun of any kind. The boys spent their days sitting in outdoor sheds, staring into space and waiting for the next mealtime to break up their boredom; or, if it was rainy or cold, they sat inside a single, undecorated room with no toys all day. Watching these boys, we were constantly reminded of how much they had lost: they had lost their parents; they had lost their chance to be adopted; and they had lost their chance to receive the help they so desperately needed. Worst of all, they had lost everything that makes life worth living: love, friendship and the hope of a brighter future. It was because of all these losses that we started calling the boys we left behind, boys like Hanson, the Lost Boys.
As bad as Aaron’s part of the orphanage was, Hanson’s part was far worse. Since Hanson’s special needs prevented him from walking and talking, he went to a lying-down room— a place where children lie in their cribs all day, every day, with no one to hold them, play with them or even talk to them. For food, many lying-down-room children receive only 2 or 3 bottle feedings a day, delivered through high-volume nipples so that they must choke it down as quickly as possible or miss their chance to eat. For care, they receive only diaper changes; and since money and staffing are tight, some are allotted only 2 diapers per day— which means that they spend hours each day lying in their own waste. Through lying down all the time, children like Hanson grow so stiff that many of them can’t bend their legs or waists. They lie in a daze, idly poking at the bars of their cribs; for they know that if they try to get out, then their caretakers will come and tie them down. All of this sad mistreatment because Hanson couldn’t walk and talk— which he might possibly have been able to do, if anyone had taken the time to help him.
In the end, Hanson gave this sin-shattered world what it seemed to want. Exhausted from living without love for so long, Hanson could no longer find any reason to live; so he relieved the world of the burden of caring for him by dying. Hanson’s death, though, could not relieve the world of a far greater burden: the sin the world carries for ignoring the cries of one of the “least of these” Christ’s brothers, the ones He cared for above all. That burden the world will carry until Judgment Day.

"The King will reply, ‘Truly I tell you, whatever you did for one of the least of these brothers and sisters of mine, you did for me.’"

Light a candle for Hanson.

If you have a blog, you can use this inlinkz tool to link it to this blog: 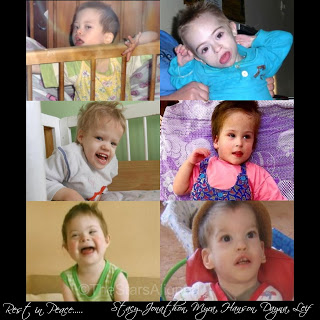 Took this picture off of http://thestarsaligned.blogspot.com/2013/07/in-memory.html

Light a Candle for Hanson and the Lost Boys.
Put your candle on your blog and link it up here.  Be voice today!!