THE GREAT WALL OF CHINA

Seeing the Great Wall was really a wow moment. The Wall was begun in the 5th Century BC to keep out foreign invaders. (The Chinese do not have a lot of nice things to say about Japanese). Construction went on for centuries. The wall is over 3500 miles. That is one huge wall. Chairman Mao once said "You haven't walked on the Wall, you haven't been good Chinese."` With the wall being that long it seems like most Chinese should have the opportunity to walk on it. They used a lot of prisoners to build the wall. If you died while building it they just threw you in the wall and buried you. I guess that was their idea of an employee benefit. It had to have been miserable work because China is COLD in the winter. Seriously cold. I've always thought pictures of little Chinese kids in the quilted clothes were cute. Now I know it's not about being cute it's about not freezing your kids butt off.
One side of the wall is taller with cut outs in the rock so soldiers could guard the wall. If enemy was approaching they would build a number of fires depending on the number of enemy. 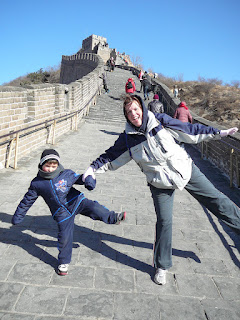 To say it was windy on the wall would be an understatement. It was lots of fun though. It was a steep climb. I couldn't believe we were really climbing the Great Wall of China I kept thinking how cool it was. 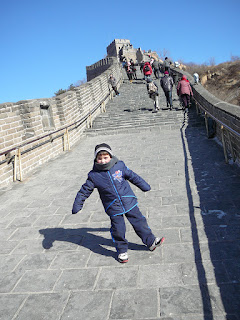 Sean was hyper he ran way ahead of us. He could have kept going and going but he had to stop and take a picture of me laying on the steps. 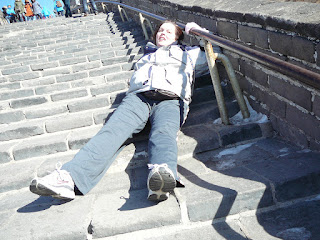 Yep, I had to lie down for a little break. Seriously my calves were burning! 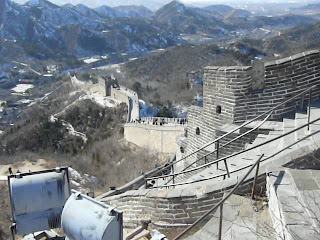 What a view. It was breathtaking. (figuratively and literally) 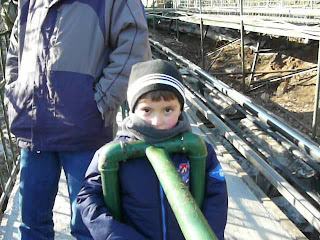 When we got to the top of the area we were climbing we saw a roller coaster that would take you down the mountain. It looked like fun and Sean really wanted to do it. The big question was where does the coaster leave you? We asked at the ticket counter and they said "on the other side of the mountain, only ten minute walk to coffee shop." Hm, that doesn't seem likely but what the heck,this trip has been about adventure. We took the ride down the mountain. There were bears in cages and lots of vendors or as our guide calls them "winders." We walked around for awhile trying to figure out how to get back to where we needed to be. There was a guy with a camel who wanted to charge 12 yen to have your picture taken on the camel. A Chinese teenager with really good English was telling everyone the guy was a crook. The teenager wanted to have his picture taken with Sean, I told him it would be 12 yen. Ha, ha! He had his picture taken with all of us. It cracked me up people wanting to have their picture taken with Sean. He is a super cute kid but he has brown hair and brown eyes. He's doesn't look that much different than a Chinese kid. The first time someone grabbed him for a picture it really scared him after that he got used to it and didn't care. We asked the teenager how to get to the other side of the mountain and he told us it was a long way back. Bummer, of course there was a taxi willing to take us back to the coffee shop and our tour bus for 200 yen. At that point I was freezing and tired and didn't care how much
Posted by Carol at 7:25 AM